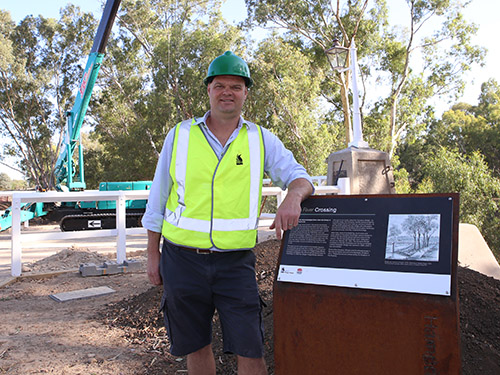 The final pieces in one of the city’s newest community spaces which marks the significance of a local landmark have been lowered into place this week towards its official opening later this year.

The Hampden Bridge may no longer span the Murrumbidgee River but its place in the city’s history will long be remembered as part of Wagga Wagga City Council’s $364,000 Hampden Bridge Legacy Project.

New seating was installed this week, requiring a small crane to lift the heavy timber and steel construction into place at the site.

The cast iron “Shoe E” seat ends were salvaged from the bridge after its demolition in 2014.

The project centres around the restoration of Abutment A and transforming it into a viewing platform with new seating, handrails, lighting, a replica gas lantern and interpretive signage telling the story of the bridge.

Some of the standout features include an etched perspex panel recreating the structure of the Hampden Bridge, the refurbishment of existing community artwork, such as Arthur Wicks’ iconic propeller, and the successful installation of a replica gas lantern which will be powered by electricity.

The project will also include landscaping from the carpark area to the Wiradjuri Bridge creating a special riverside space for the community to use and enjoy. Landscaping has been delayed due to the hot weather this summer and will resume in autumn.

The area will be grassed and about 400 plants added to the local environment as part of the finishing touches to the project.

Mayor of the City of Wagga Wagga Councillor Greg Conkey OAM said the project promises to capture the imagination of many residents who will find the tribute to the bridge an interesting place to visit.

“The area tells a story about the history of the bridge, its builders, engineering innovation and how it transformed the city,” Cr Conkey said.

“Detailed signage and photographs have been installed around Abutment A which gives the community a chance to engage and interact with artefacts from the bridge in new and innovative ways.”