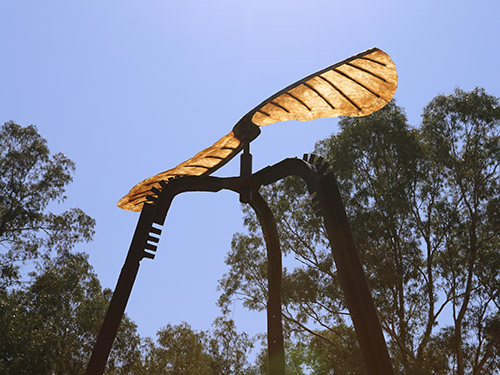 One of Wagga Wagga’s most iconic public artworks has regained its pride of place along the Murrumbidgee River.

The propeller-topped sculpture, titled Event on the Riverbank towards the End of the Twentieth Century, was first installed beside the footings of the Hampden Bridge in 1996.

Six metres high and four metres wide, the Arthur-Wicks-creation quickly became one of the city’s most iconic large-scale artworks.

“I always had an interest in rotators and propeller-like objects. I was hoping this [sculpture] would be more aerodynamic,” Mr Wicks said.

In a 1997 interview with the Sun Herald, the acclaimed Wagga Wagga artist described his sculpture as “like something out of Mad Max”.

“It’s like a helicopter, or a dragonfly, or a wounded bird, a pterodactyl-like thing that’s crash-landed here,” Mr Wicks declared at the time.

Decades after its installation, Mr Wicks was back at the historic site to oversee Wagga Wagga City Council staff give the artwork a new lease on life.

The propeller, though awkward to move, isn’t overly heavy, made of steel and fibreglass.

As part of the maintenance work, timed to coincide with the Hampden Bridge Legacy Project, the towering steel structure beneath the propeller also received a much-deserved overall clean.

“We also had some minor repairs carried out to the footings and a weatherproof coating was applied to the structure,” Council Cultural Officer Tim Kurylowicz said.

Under the artist’s direction, council staff replaced a part of the artwork that went missing long ago.

“There are three wheels at the bottom (of the artwork) … two bigger wheels and a small one,” Mr Wicks said.

“We had to replace the little wheel because it was broken off.”

The propeller restoration is part of Council’s ongoing maintenance program of the city’s many public artworks.

“We maintain around 50 artworks and sculptures across the city,” Mr Kurylowicz said.

“Each year they are inspected, and we prioritise the needs for cleaning, maintenance and repairs.”

“It’s been a great opportunity to work alongside Arthur Wicks who is a renowned living artist who still resides locally to restore his original vision for the work.”

Visit publicartwagga.com.au to view the city’s entire collection and discover more about the history and location of each artwork in the City’s Public art collection.