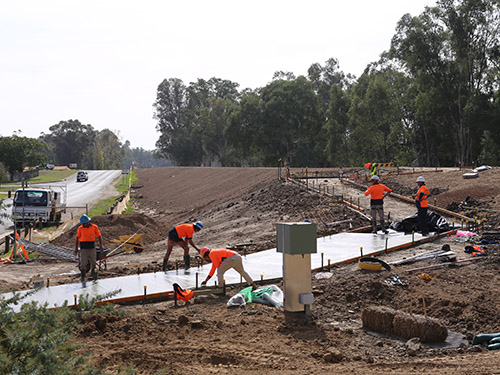 The finishing touches to the first link in Wagga Wagga’s new 45km cycling network are being rolled out in preparation for next week’s official opening.

Mayor of the City of Wagga Wagga Councillor Greg Conkey OAM will hop aboard his bicycle and test out the new Levee Link to mark the grand opening of this section on Thursday 10 October.

The Levee Link is the first section of the Commuter Cycle Network to be completed as part of Wagga Wagga City Council’s $12.8M Active Travel Plan.

It stretches from the Wiradjuri Bridge to Wagga Beach and is the first of 10 routes of high-quality cycle paths to criss-cross the city, providing residents with a safe, alternate transport option.

Cr Conkey said the Commuter Cycling Network will enhance the liveability of the city, while also serving as a new attraction for visitors looking to embrace a different recreational activity.

“Council is committed to promoting an active and healthy lifestyle,” Cr Conkey said.

“A facility such as the cycling network will add to the liveability and accessibility of our city.

“This is the largest cycling infrastructure project taking place in NSW at the moment. It’s a huge boost for Wagga and to see the first link opened is a great step forward in a very worthwhile project.

“I can see so many people benefiting from this cycle network – local residents and visitors alike – it’s a fantastic initiative which is a great addition to the city.”

In addition to the 45km of cycleways which will link residential parts of Wagga Wagga with the CBD and Charles Sturt University, the project will also provide end-of-ride facilities at two CBD locations, including bicycle parking and amenities.

The opening of the Levee Link will soon be followed by the completion of the Red Hill Link in the western section of the cycleway.

“Council will have a rolling delivery program of the different links over the next 18 months.”

The Active Travel Plan is expected to be completed in 2021.

The opening on Thursday 10 October is set to take place around 12 noon with a community event and barbecue.

It will take place at the levee bank at the intersection of Fitzmaurice and Crampton streets, near the Hampden Bridge Legacy Project area.