The Narrung Sewage Treatment Works was commissioned in 1914 as a simple septic tank to service the town. By 1953, extensive works were required to upgrade the facility to keep up with the demand of the growing city of Wagga Wagga.

In the late 1960's the tertiary ponds that now form the Marrambidya Wetlands were extensively remodeled to polish the final discharge before entering the Murrumbidgee River.

Major improvements in aeration times of wastewater after an upgrade to the Narrung Street Sewage Treatment Plant in 2010 resulted in the tertiary ponds (known sludge lagoons) no longer being required. As a result of this redundancy, there was a need to decommission them to meet EPA (Environmental Protection Authority) Licence requirements. The preferred option was the development of a wetland in this location. Examples of similar wetlands are found at Wonga Wetlands at Albury, Fivebough Swamp at Leeton and Gum Swamp at Forbes.

In 2011, Wagga Wagga City Council secured funding from the NSW Environmental Trust to develop a master plan for the construction of a wetland at the disused ponds of the Narrung Street Sewerage Treatment Works. 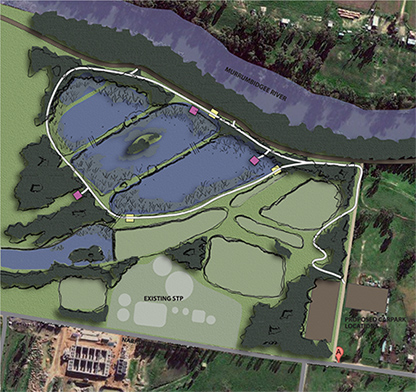 The design was adopted by the Council at the July 2015 Council meeting. The meeting also endorsed that the project was to proceed and allocated $737,289 of funding towards completing the wetland. Of this, $200,000 was contributed by Riverina Local Land Services. An additional $90,000 was contributed from Origin Energy.

In addition to the involvement of Council, many organisations have contributed to the success of the Marrambidya Wetland. These include:

The Marrambidya Wetland Advisory Group had representation from:

Transformation from Treatment Ponds to Wetland

See the transformation of the Wetland take shape through the below photos.

It is dreamed that the Marrambidya Wetland will once again be a special place for both indigenous and non-indigenous peoples as they connect to the land. The site should be seen as an opportunity to engage with and learn about our natural environment, and also a space that we can use to reflect upon our own individual connection to country from wherever we reign.